Geomorphology: The Shape of the Sahtu Landscape

Ageological province is an extensive region with distinctive characteristics that differentiate it from surrounding areas. Ashield is an large area of very ancient rocks that have been levelled by erosion. A platform the part of a continent covered by flat-lying or gently tilted rock and underlain by very ancient rocks consolidated before deposition of the overlying layer. The rocks of the platform layer are usually sedimentary. An orogenic belt is a part of the continent where the Earth's crust has been deformed, leading to the creation of a mountain range.There are four geological provinces found within the Sahtu: the Cordillera, Interior Platform and Bear provinces. These large regions are each found within even larger geomorphic regions respectively: Rocky Mountain Cordillera, Interior Plains, Canadian Shield and Arctic Platform. To be identified as a geomorphic region, each must have three major characteristics - a large connected area with similar geological features, landforms that have been shaped by similar processes and common geological structure with a shared geological history.

The Arctic Platform extends under the islands of the Arctic archipelago, between the Innuitian Orogen and the Shield. Some of its strata may contain oil and natural gas.

The Bear Province forms part the Canadian Shield, mostly made of Pre-Cambrian igneous and metamorphic rocks. Rocks 2.5 billion years old once formed mountains, but have since eroded. Often exposed within the Canadian Shield, these rocks are also found beneath most of the more recent geomorphic regions such as the Interior Plains.

The Cordillera includes the Mackenzie and the Franklin Mountains, part of the western chain of mountains stretching through North and South America. During the Wisconsin ice age, 25,000 years ago, the Cordillera in the Sahtu was heavily glaciated, It became mostly ice free approximately 10,000 years ago, leaving river terraces and alluvial fans.

The Interior Platform underlies most of the Sahtu. Part of its thick layer of sedimentary rocks contains ancient fossils deposited by advancing and receding oceans after the end of the Pre-Cambrian era (1/2 billion years ago).

Bedrock Geological Map: Intact, Solid Bedrock At Or Near The Earth’s Surface

SedimentaryRock - Formed from the consolidation of solid fragments from rocks or organic remains, or by precipitation of minerals from solution

Volcanic (extrusive)Rock - Igneous rock formed from lava the flowed out onto the Earth's surface, characterized by rapid solidification and grains barely visible to the naked eye. 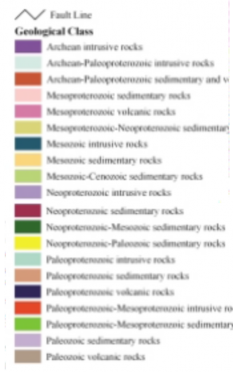 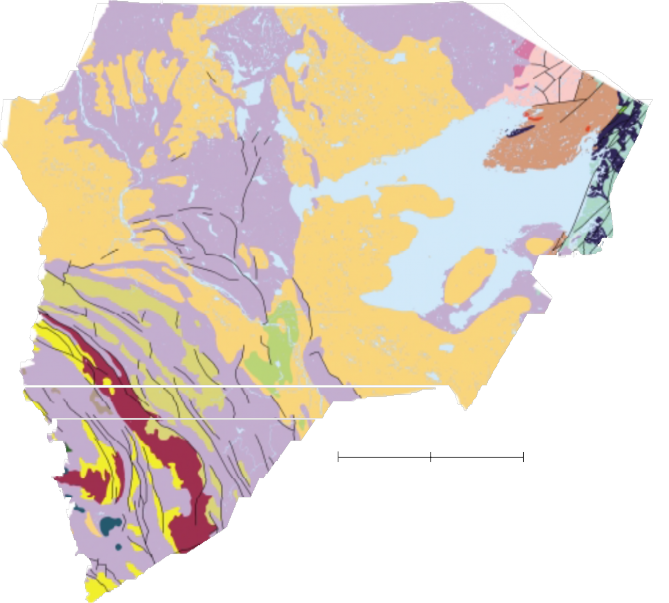 Much of the landscape we see in the Sahtu today has been shaped by glaciation. Very thick sheets of ice (some as much as a kilometre or more in height) once covered much of the Sahtu. While parts of Canada weathered at least five glaciation periods, geological records indicate that the Wisconsin Laurentide Ice Sheet (25,000 years ago) reached the Mackenzies. These grew and shrank, and finally melted away scraping and scouring the bedrock and leaving behind thick deposits of gravel and sand dotted with boulders.

Surficial material is the sediment deposited by ice, water, wind and gravity during the ice ages through to the present (Quaternary period). Because permafrost underlies much of the Sahtu, most surficial deposits are generally frozen or contain ground ice.

Much of the Sahtu, especially within the Interior Platform has a thin to thick cover of glacial till which either blankets the underlying bedrock or creates a hummocky, rolling landscape. 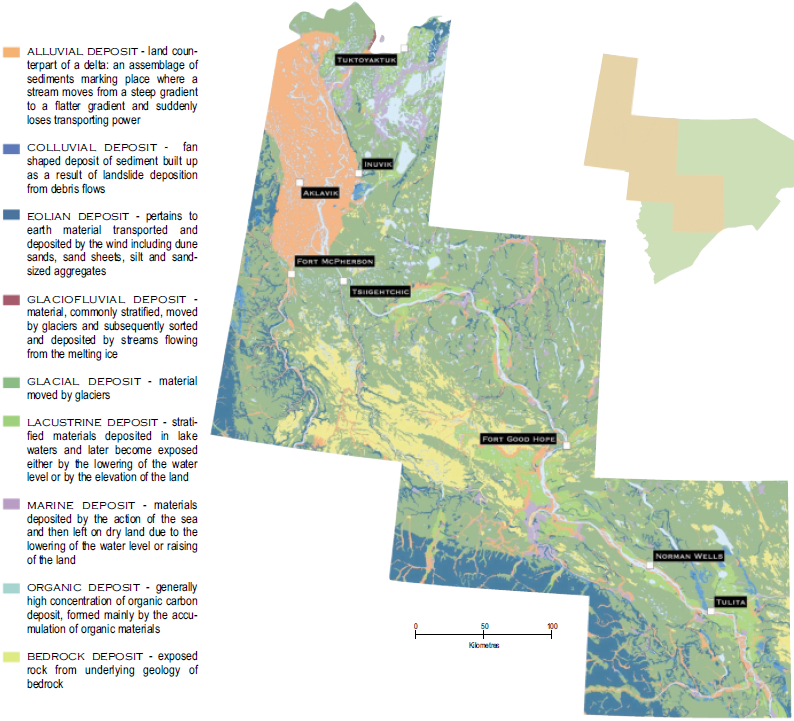 Fee Yee is a formation of high limestone cliffs located up the Mackenzie River from Fort Good Hope. Here the river cuts through sedimentary bedrock, harder than the alluvial materials in most of the rest of its valley. Fee Yee is an important domestic fishery and was historically used as a refuge for local people to defend against raiding parties of Inuit travelling from the Arctic coast.

Wichididelle, an important culture-hero for the people of Fort Good Hope, created the topographic features at Fee Yee while chasing the giant beavers, and other creatures from the land. 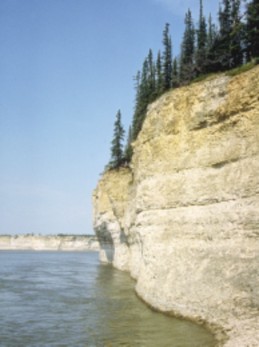 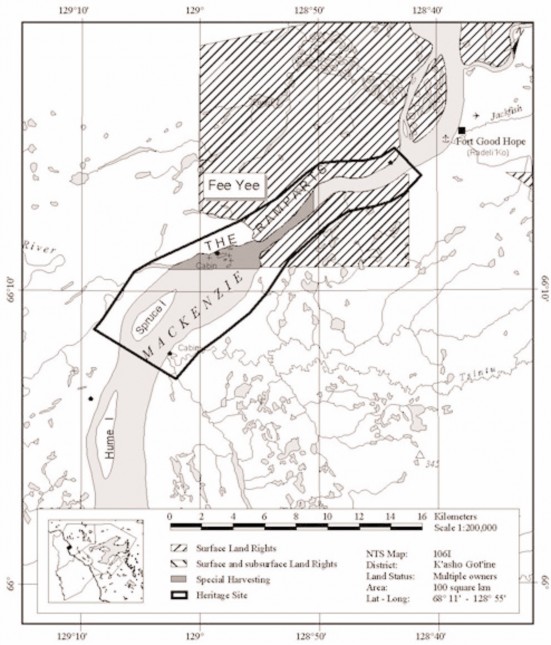 The Ramparts rapids [located at the head of the Ramparts] were created when Wichididelle threw rocks at a giant beaver. There's also a place where he laid down for a nap—his head and footprints can still seen today. The small waterfall is where he had a pee. These places are close [to Fort Good Hope].... There's a fish camp with cliffs close by where he took a bear. He continued his travels until he got to Bear River where he killed some beavers and pegged their skins on Bear Rock. His arrows can still be seen in the river near Tulita. They'll remain this way until the end of time.

His boat is located above the rapids [Spruce Island is said to be his overturned boat]. He said in the legends that he would return one day for it. The giant did return for his boat once but he met the wolverine and told him his intentions to return to this land to get his boat, and also that there should be more people for him to eat. The wolverine told him, "Everything remains the same as when he left, not many people there at all." So the giant turned back and forgot his plans to come back. His boat is still there.