The Délı̨nę Song book is about the singing, drumming, and playing traditions of the Sahtúot'ine who nowadays live in Délı̨nę, a community on the shore of Sahtú (Great Bear Lake) in the Canadian Northwest Territories. There are many reasons such a book can be of interest, but the main objective here is to offer to the people of Délı̨nę one path into their historical past, the song path. The materials brought together here come mainly from a recording collection I made between 1988 and 1992 (also in 2012, 2014, and 2015) with many Elders who not only talked to me, but also sang a good number of songs. Thus this book-with-audio should reflect those Elders' talking and singing voices, and much of the knowledge and wisdom they wished to transmit to the future generations. Already in 1988, many of them told me that they thought these recordings were useful for exactly that purpose. They are still saying it today.

For example Alfred Taniton who was talking one day about the old Dene ways of playing finished his explanation by saying what he thought of this book-with-audio project:

"Now it's not like that, so our games from long time ago, and all that Elders did on the land, we don't talk to them about it now. At school they do what they have to do, so now our children start to think differently. But if we make a good book for them, and they see it, they will agree. They will think: "That's why we had Elders with us." So when she's asking questions about this, she is doing the right thing. Whatever we know, we should tell her. It must be good." (Alfred Taniton 2015 ACQ 3345-0061)

The idea was to give back to Délı̨nę the benefits of a research project that started so long ago in a way that would be immediately useful. So, from the many hours of recording featuring 19 Délı̨nę Elders, some 125 audio excerpts were chosen to illustrate the different topics: ets'ulah, ı́lıwáh, edzi, náogeye, ǝghǝle, naowhenáreɂę, godı, and a few other things such as a discussion of Dene singing styles. Each topic presented will be accompanied by a specific Dene-English terminology. Approximately 100 audio excerpts were transcribed into Dene by Alina Takazo, including song texts when possible. Also translated into English, the texts are complemented with song notations (approx 150). Some drawings by Dennis Kenny as well as a number of photographs will also be included. 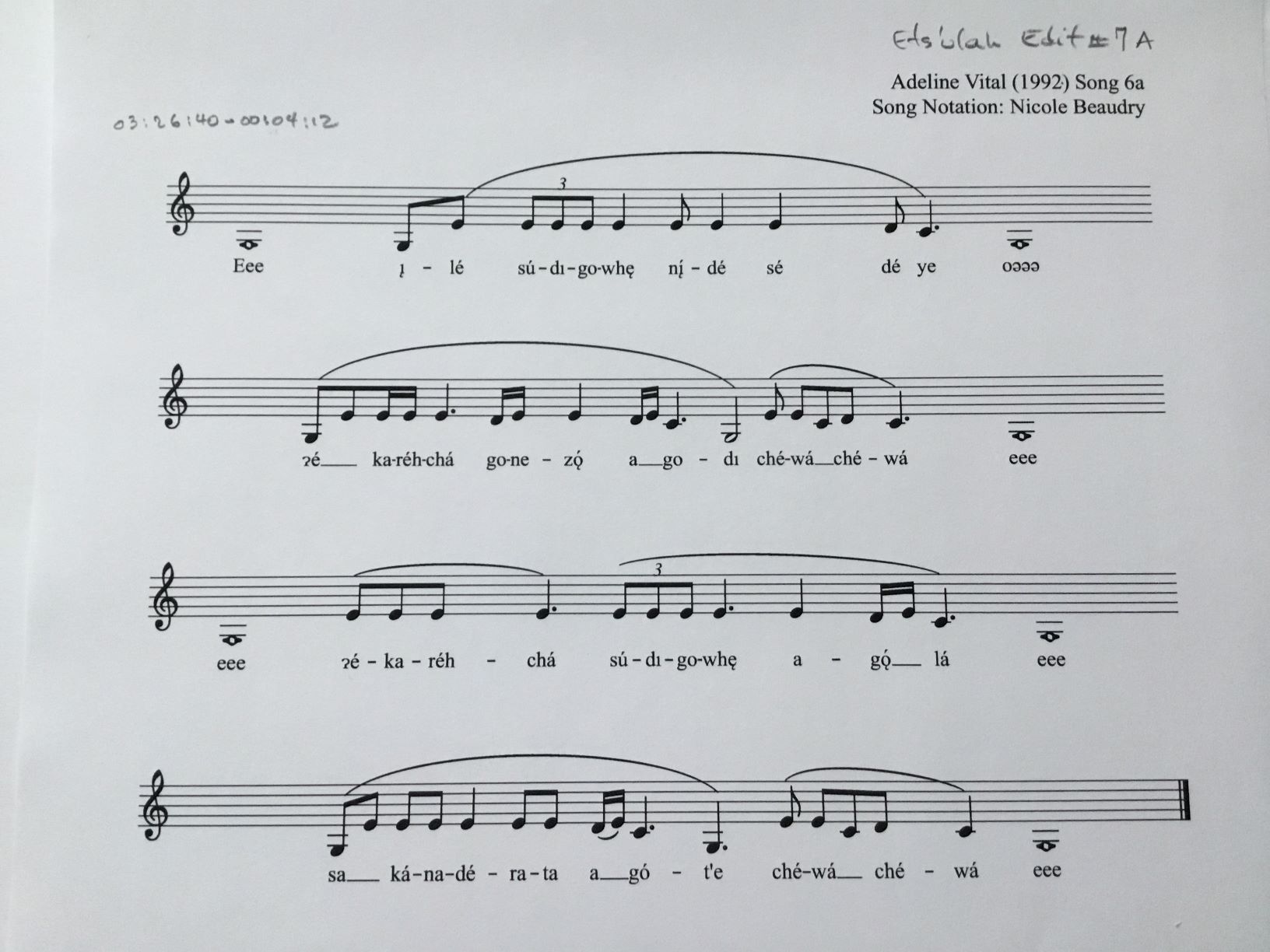 WHY WRITE A BOOK ABOUT SONGS? Why not just hear the songs themselves on an audio document? Because I strongly believe that songs are a powerful vehicle for any people's traditions, although their meaning is not always obvious at first hearing, even for those of the same culture. Most Dene singers tell the story of their song, and explain how it is meaningful to them. It is so important that young people hear their elders' words about the songs and the traditional Dene lifestyle. That is why the book is called SONGS and STORIES from Délı̨nę. Together, these songs and stories open the door to Délı̨nę's historical past, to the profound human values inherent to Dene culture, to the relationships and behaviours of groups and individuals, to people's spiritual lives, to their sense of humour, and to their capacity for rejoicing. Yes, all of that can be learned through song. But more importantly even, the songs enhance the importance of learning to 'listen' (as opposed to simply hearing) - not only with one's ears, but also with one's heart and intelligence.  Listening leads to learning, which means that one is in possession of necessary tools for a long and harmonious life.

Funding for the book project