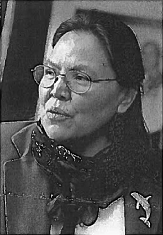 Ms. Tatti was born to the Sahtuotine First Nation on Great Bear River in the Northwest Territories, Canada and she is a fluent speaker, writer and storyteller of the North Slavey Language. For more than 30 years, Ms. Tatti has been a major force in bringing Dene languages and culture to prominence. She is recognized as a strong and effective advocate for Aboriginal languages and culture. She worked with the Dene Nation in the mid-1970s, as a Community Development Officer and a Land Use and Occupancy Researcher and Co-ordinator. Her work with the Dene Nation kept her in close touch with Elders which enhanced her abilities as an
effective interpreter.

For 23 years, Ms. Tatti worked with the Department of Education of the Government of the Northwest Territories, during which time she continued to work with the Elders. She was instrumental in developing and publishing many Dene language children's books. Based on her vision of Dene teachers as scribes for the Elders, Ms. Tatti undertook the tremendous task of bringing together Dene elders, teachers and language specialists to develop the first Dene languages curriculum. The Dene Kede curriculum, a legislated document, is a highly acclaimed piece of work which led to other jurisdictions in Canada inviting Fibbie to assist in developing their own aboriginal language curricula.
Throughout her career she has worked closely with Aboriginal leaders, elders, language experts, Aboriginal and non-Aboriginal teachers and inter-provincial education professionals. Ms. Tatti's experience in language and education contributed directly to her being chosen as co-chair of the Aboriginal Language Task Force during the mid 1980s. Ms.Tatti was instrumental in reflecting the needs and visions of the Elders through a number of recommendations including legislating the official recognition of the aboriginal languages of the NWT. As NWT Languages Commissioner, Ms. Fibbie Tatti acted as an advocate and monitoring agent of the NWT Official Languages Act, which includes the languages of Chipewyan, Cree, Dogrib, English, French, Gwich'in, lnuktitut, lnuinnaqtun, Iuvialuit, North Slavey and South Slavey. In addition to ensuring government services in the 11 NWT Official languages, the Act also ensures official Aboriginal languages preservation and development.

Ms. Tatti was also one of the first Aboriginal people to work with the communication media in the NWT. She produced and hosted a half-hour news and community affairs radio program in the Aboriginal language for CBC North. She was also the host for the first CBC North TV current affairs program. In recognition of her knowledge and experience, Ms. Tatti was invited to participate as an official delegate in the Governor General's State Visit to Russia in 2003. In September 2011, she was inducted onto the College of Education's Wall of Honour at the University of Saskatchewan. Ms. Tatti continues to work with and on behalf of the Dene in the development and enhancement of Dene languages and culture.

Fibbie completed her Master of Arts degree in Indigenous Education in May 2015 with a thesis entitled The Wind Waits For No One: Nı̨hts’ı Dene Ası̨́ Henáoréhɂı̨́le Ǫt’e: Spirituality in a Sahtúgot’ı̨nę Perspective. Fibbie continues to conduct research in Délı̨nę, with a focus on mapping placenames.