Dall's sheep, Ovis dalli dalli are medium-sized, hoofed mammals, or ungulates. Rams weigh from 80 to 100 kg and ewes are smaller at 60 kg. Both rams and ewes grow horns throughout their lives.

They are graceful and agile in their rugged, mountainous habitat. The pliable centre of their hooves and a hard rim provide good traction on steep outcrops. Sheep have excellent eyesight and a well developed sense of smell.

Usually, rams that are older than 4 years roam in small groups of 3 to 10 individuals, but sometimes rams are found alone. Ewe groups tend to be larger and contain young rams, yearlings and lambs of the year.

Individual Dall's sheep confine almost all their movements to a particular mountain block that contains both the winter and summer range. Up to 300 sheep can use the same winter and summer blocks each year and from generation to generation. Therefore Dall's sheep are very slow to recolonize an area if the population is severely reduced. It also means that the sheep are very sensitive to intense human activity on their ranges.

Grasses and sedges make up about 70% of the diet of Dall's sheep. The leaves and stems of some shrubs and certain flowering plants are also selected and may be important seasonally. Lichens and mosses may be eaten in winter when the sheep often must paw through several centimetres of snow. Minerals from mineral licks are an essential component of the diet of Dall's sheep and well established trails lead to the licks. 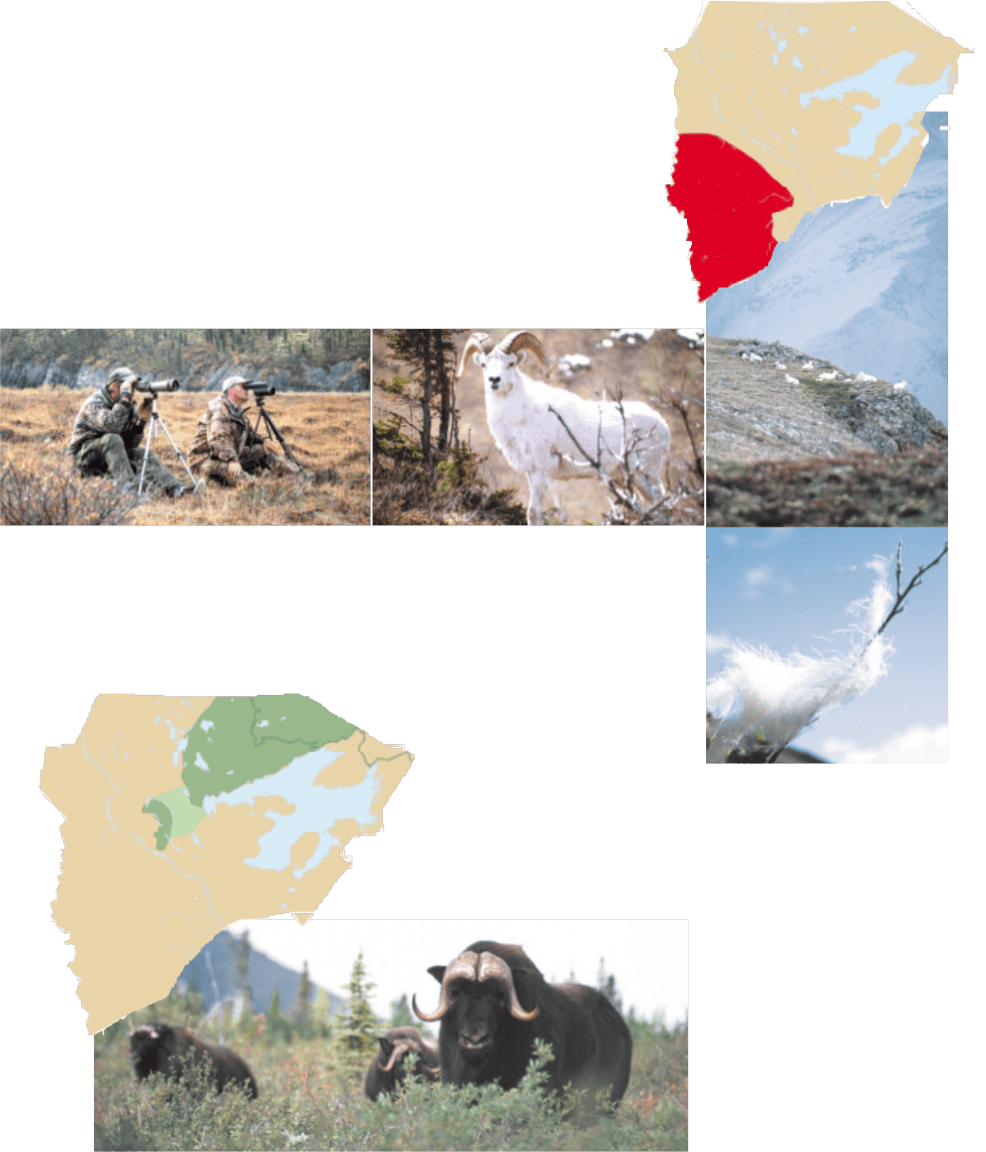 K’çyeneyo means "place where sheep are chased down." It is an isolated mountain, south of the Gravel River, at the headwaters of the Moose Horn River. It is a good place to find ewes and lambs at this time of year. In the old days, sheep were chased down from the tundra plateau into snares of babiche. Sheep are famous for their climbing skill. In fact, Alfred Thomas of Fort Simpson said that the white sheep had a gummy substance that was exuded from between their toes when they were climbing or descending steep terrain, increasing their traction. But there is one cliff they cannot climb, north northwest of K’ę́yeneyo. It is called Petł’áɂenejo, or "mountain where sheep are run against a cliff." There they could be killed by hunters.

From Snowshoes and Ptarmigan Feathers by Norman Simmons with Maurice Mendo
Originally published in the Mackenzie Valley Viewer, October 2002

Muskoxen, Ovibos moschatus are found on the arctic islands of the Northwest Territories, as well in the area north of Great Bear Lake up to the Arctic coast. Recently, they have increased in numbers and expanded their range into the Franklin Range.

Muskoxen are completely covered by hair, except for the horns, hooves, lips and nose. They have an under layer of short fine wool of exceptional warmth, known as qiviut, covered by a dark brown or black shaggy coat. Their diet consists of willows, sedges, rushes, grasses and willow herbs during the summer, and graminoids, crowberries, bilberries and willows in the winter.